In “Fumes,” readers will join Rio and Mateo Alfieri, Marco and Olivia’s sons, as they assume the mantle of their parents’ devoted mission regarding the Six Gifts and their prophecy.

THE SIX GIFTS DESTINY IS REVEALED

For Rio and Mateo Alfieri, having two miraculous gifts in their possession proves bittersweet – and also, terrifying. The brothers have a curious sense that they’ve been groomed for the challenges they face since birth, but the responsibility they find, is a daunting one. Reunited after a long estrangement, the brothers know that they must cast their egos aside and band together to protect themselves, their families and the gifts. Mounting danger leaves them vulnerable at every turn, while their own impulsiveness triggers threats to their well-being. In desperation, they travel to Spain to seek answers from family. But destiny has other plans, sweeping them into a future they could hardly have imagined.

FUMES leads us on a perilous path to understand the true nature of courage. For the brothers Alfieri, it is the courage to believe in something far greater than themselves. 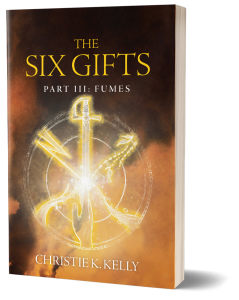 Their dad has a magnifying glass that he keeps in his dresser drawer with tie clips and golf tees and other junk. Every once in a while, he’ll take it out and let Rio and Mateo use it on the sidewalk to burn sticks and leaves and stuff. Then he’ll put it back in the drawer for safekeeping. Rio thinks about that magnifying glass all the time. He lays in bed at night and marvels over how sun and glass can create fire.

On this sunny afternoon, while his mom is busy in the kitchen and his dad is golfing, Rio sneaks into his parents’ bedroom, stealthily slides open the drawer and confiscates the magnifying glass. He slips it into his backpack, recruits Mateo for an expedition and tells their mom they’re riding their bikes to Billy’s house up the street. It’s their standard alibi: they always say they’re going to Billy’s house. But they never actually go there. Billy’s no fun to hang around with. He’s a scaredy-cat.

As they glide down the driveway, Rio glances back to see his mom in the front window checking to make sure that her 8- and 10-year-old sons are wearing their helmets. He waves goodbye to her and the brothers pedal as fast as they can until they’re out of sight. Then the helmets come off. Stupid helmet law, Rio thinks.

Mateo leads the way through their safe, small-town neighborhood, down Pacific and left on Longboat, until the road ends at the woods on the edge of town. There’s a ramp some kids built out of plywood that stretches over the curb and a dead log. Mateo takes the jump with a hoot and a holler. Rio follows him, exhilarated by the moment of weightlessness that he feels in his stomach when his bike leaps through the air. His tires land squarely on the dirt path that snakes its way through the woods. They head east toward the clearing where teenagers hang out at night, a trail of strewn beer bottles and scattered trash marking their route.

It’s a bright September day, and the clearing is suffused with a wide swath of sunlight. The boys skid to a stop and lay their bikes on the ground. Mateo walks around the rocks and logs the teens have arranged in a circle to sit on. He kicks at the beer bottles. “Can’t wait ‘til we’re old enough to drink beer,” he muses.

“Yeah,” Rio agrees. “But look what I have.” He pulls the magnifying glass out of his backpack and flashes it in front of Mateo.

Mateo’s eyes widen. “You stole that from Dad’s dresser?”

“Well, I didn’t exactly steal it. I’m gonna put it back.”

“Let me see it!” Mateo demands.

“No way! I’m first!” Rio grabs a candy wrapper off the ground and finds a good spot where he can catch the sun’s rays and train them through the convex glass and onto the paper wrapper. It only takes a couple minutes for it to flare up and burst into flames.

“Let me try,” Mateo says. Rio hands him the magnifying glass and they start in on a little pyromaniacal frenzy, taking turns to see who can ignite the biggest flame. Quickly bored with frying one wrapper at a time they gather a wad of trash and some sticks and Rio gets a real fire going. They watch it for a few minutes, adding whatever they can find to build up the flames. But they soon run out of trash and sticks and wander into the woods to search for more. By the time they get back, they’re alarmed to see that the fire has caught onto a nearby log and a pile of dead leaves, with flames shooting up a good four-feet high.

Rio runs up next to the fire and begins to kick dirt at it. “Come on, help me!” The brothers kick at the dirt with their sneakers, but the dirt is mixed with leaves, and their effort does more to fan the fire than to put it out. Rio grabs a beer bottle and gets down on his hands and knees, digging at the earth with the neck of the bottle to try and loosen it up so they can throw handfuls of dirt to try and choke the fire. Mateo follows suit, but the flames have already spread over a trail of leaves to ignite another log.

“Shit!” Rio yells and digs harder. The beer bottle clinks against something in the hole he’s digging, and it captures Rio’s attention. He tunnels around the piece of metal that catches his eye until he can finally pull it free from the ground. Rio sees that it’s a long thin knife that looks like it’s been buried for a hundred years. “Mateo look!”

Mateo stops throwing dirt to check out Rio’s find. “Wow! That’s cool! It looks really old!” The brothers’ attention has been hijacked from the fire that’s quickly getting out of control to the knife in Rio’s hand. The steel blade is rusted in spots, but the handle looks barely worn. It’s made of brass, with what looks like maybe copper wound around the end.

A siren blares in the distance, breaking the spell the knife holds over them, and the boys realize their fire has grown into a sizeable—and rapidly spreading—blaze. Rio sticks the knife in his backpack along with the magnifying glass and they hightail it out of there, pedaling as fast as they can until they swing their bikes into the driveway and then all the way into the garage, closing the garage door behind them.

“Hi Mom!” They say in unison as they walk past the kitchen with their hands in their pockets.

“Hi boys. Clean up for dinner. Your dad should be home any minute.”

They close the bathroom door behind them and Rio pulls the knife from his backpack. He runs it under the faucet to clean it off and then soaps his dirt-encrusted hands. Mateo sticks his equally dirty hands into the sink. By the time they’re done, the sink, counter and hand towel look as though the boys were making mud pies in the bathroom. But they don’t notice.

“Keep watch,” Rio says. “I have to put the magnifying glass back in Dad’s dresser.”

“You’d better hurry up,” Mateo warns. “I can hear the garage door opening.”

Rio scurries down the hall to his parents’ bedroom and then into his own where he stashes the knife under his mattress.

They all sit down to fried chicken, mashed potatoes and gravy—their favorite. “Did you hear the sirens?” their dad asks. “Looks like there’s a fire in the woods off Longboat.”

“Those darn teenagers!” their mom says as she shakes her head. “You boys stay away from those woods. You hear me?” Rio and Mateo nod their heads in vigorous assent, with their eyes wide and their mouths full. They both look like cats that ate canaries.

That night, Rio pulls the knife out from under his mattress to examine it again. He uses the little flashlight he keeps in his closet inside his old sneakers. The knife is way old, he can tell. He bets it’s even older than 100 years. He imagines it being used in an Indian knife fight. To tell the truth, it looks more like a mini-dagger than a knife. Maybe Indians didn’t make it after all. Maybe it came from Europe with Christopher Columbus on the Santa Maria or something. He bets it’s worth a bunch of money. But he can’t tell his parents about it. And he’s going to have to hide it better. He knows exactly where. He’ll duct-tape it to the back of his bottom dresser drawer. The same place he hides his money. He’s got a pouch with $23 back there. It’s money he’s earned from selling the chips and cookies his mom packs in his school lunch every day.

Rio sits on the edge of his bed tossing the knife from one hand to the other and conjuring up images of the explorers who probably owned it. “Ouch!” he whispers when it slips, and the knife cuts his palm. He picks up the flashlight and shines it on his hand. There’s a line of blood with a little crimson pool welling up. “Shit!” he says under his breath. Looking around his room, he realizes he doesn’t even have a tissue to clean it up. He turns off the flashlight, stashes the knife and quietly sneaks into the bathroom, silently closing the door behind him. But when he turns on the light and looks at his hand, there’s no blood and no cut. “What?” he says out loud, stunned.

“Rio is that you?” his mom yells from the living room.

Rio flushes the toilet to make it sound good and tiptoes back to his bedroom with a wad of tissues. He takes the knife out from under his mattress, braces himself and then slices it across his palm again. He puts the knife down and turns the flashlight on to check for blood. Sure enough, red splotches dot his hand. He stares at the cut. Nothing happens except a little more blood seeping out. He picks up the knife and examines it with the flashlight. If his mom knew what this knife looked like, she’d make him get a tetanus shot. He’s heard about those from kids at school. They say those shots really hurt. When he looks back at his palm, the cut and the blood are, once again, gone.

“Rio get to sleep!” his mom yells. “You’ve got school tomorrow.”

He sticks the knife and the flashlight under his mattress, gets in bed and pulls the covers up tight to his chin. If he tells Mateo what just happened, he won’t believe him. And if he tries to show him and it doesn’t happen again, he’ll look like a fool. He waits until everyone is asleep and sneaks out to the garage to find some duct tape. When he gets back to his room, he pulls out his dresser drawer and tapes the knife to the back next to his money, securing it with way more tape than it needs. He gingerly slides the drawer back into place, peels back his curtains and stares up at the night sky. After a while, he moves to his bed where he sits with his knees hugged up to his chest. When he gets up for school in the morning, he’s pretty sure he never slept a wink.