In Book I, “Secrets,” the author asks us to imagine a moment in our lives when that extraordinary purpose we’ve always had a feeling we were born for actually reveals itself.

Nearly killed by poisonous gases in their own home, Olivia Alfieri and her husband, Marco, survive their ordeal by fleeing to the mountains of Vermont. But a new, secluded life isn’t enough for Olivia, who knows in her heart that it isn’t where she’ll find the answer to a question that’s been burning inside her since she was a toddler, when she nearly drowned TWICE. As she coined it, she’s been searching all her life for “THE WHY” – why she was saved then, and now, remarkably, once again. Stirred into action by a long-lost friend, she embarks on a solo adventure to Colorado, where, by apparent fate, a wizened old woman takes Olivia into her safekeeping, leaving her with a gift that will change her life forever.

SECRETS is a story about healing – both physically and emotionally. And like the river that Olivia is drawn to visit so frequently, healing flows both clear and murky.

Excerpt From Part I : Secrets 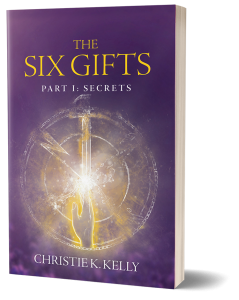 Olivia is slapped into consciousness—or more like punched—and comes to with her small, mystified face inches from the concrete, water erupting from her mouth in little spurts, like a fountain misfiring.

She senses no pain at all, just an overwhelming desire—an almost frantic need—to return to where she’d been just a moment before. She rolls her head toward the pool, her eyes darting from side to side searching for the comforting blanket of light that, a second ago, had so lovingly enveloped her. The sun glints a harsh yellow off the pool’s surface, not the same mystical white light she’d just been surrounded by.

A cacophony of voices rises and falls around her. Her tiny body is lifted from the ground and positioned in a lounge chair. Many hands move over her, each frantic touch feeling like an interruption, an erasure of sorts, slowly washing away the sensation still fresh on her skin, the ecstatic feeling that she’d been drizzled with warm honey from head to toe. White honey, though, a kind so pure that it isn’t really honey at all, but something else entirely.

Later, Olivia cannot sleep. She can’t eat or drink or think of anything but the ecstasy of the white light. She holds vigil for it under her bed covers, behind her eyelids, inside her brain, just under her skin. She simply cannot let it go; can’t allow herself to have lost it. She attempts with all her might to retrieve it. But, like a wisp of smoke through a window screen, it had slipped away.

The very next day, Olivia follows her older sisters to the next-door neighbors’ pool; the only backyard pool in the entire town. With a soldierly determination, she marches in slow motion, as one does in water, down the pool steps and across its floor, seeking yet again, without hesitation, that which had swaddled her the day before.

This time, Olivia’s sister spots her first, her hair floating in a sinuous, slow-moving eddy around her still, composed body. There is commotion, voices, more pounding on the back, another fountain of tiny spurts. But Olivia hangs on to the white light a little longer. And, this time, it is even whiter, warmer and sweeter, almost like the feeling of submerging into a steaming bath, or when, on an exceedingly hot day, a cool breeze seems to lift your body ever so fleetingly from terra firma. It is all of this and more. It is unexplainable, and then it is, again, gone.

Three-year-old Olivia is no longer allowed near water until she has proper swimming lessons. But she knows now that she can wait. She has all the time in the world. She is blessed, and she knows it. There is a reason the white light has teetered her on its knee, revealing itself as an astonishing comfort, an eternal grandmother in waiting. With this recognition, she basks in an indescribable peace, and yet, at the same time, she is filled with a sudden sense of urgency and understanding. She was saved and remains here for a reason.

It is a paradox. She aches for the white light. But the wanting to know Why eclipses the ache. It eclipses it day and night, year after year, and emerges as a driving force within her.