After the sewer flooded the basement, I couldn’t bring myself to go down there, which meant that Michael had to lug the laundry up and down the two flights of stairs. But even just folding and wearing the clothes wigged me out, so I petitioned for a new laundry room on the second floor in one of the spare bedrooms. We hired a local guy who came recommended, and three months later he began the renovation, updating our master bath as well.

Renovations take a while, and I was anxious for the job to be completed. The disruption made me tired. But once it was finished, I went gung-ho on the laundry room, painting it a cheery yellow with a whitewash over the top. Next, I started in on one of the walls, where I entertained visions of a large, colorful sunflower that would reach from the floor nearly to the ceiling. But it seemed that my body didn’t want to cooperate. My enthusiasm was still there, but I felt weak. Just climbing the stairs became a chore. Every time I did have the energy to go into the laundry room, I was alarmed that there were big black flies on the window screen. I’d remove the screen and shoo them out, chalking it up to the fact that the washer and dryer and the cat box shared the room. 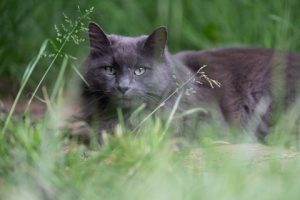 My attention and concern moved to our cat, Sage, who was leaving a trail of blood spots on everything. Her eyes were bleeding, and the vet had no idea why. I made no connection at the time, but my own body suddenly burst forth with hundreds of blood spots all over my torso. I found myself—someone regarded as a disciplined businesswoman—crying at the drop of a pin.

It was the Fourth of July, and we had planned a party to watch the fireworks our small New Jersey town sets off over the Toms River. I was out running last-minute errands, and the final stop was at Lowe’s, where I wanted to pick up a couple of outdoor chair cushions. As I was standing in the aisle checking out the selection, I swatted at a tickle on my bare leg, and my hand came back wet. I looked down, and in total shock saw that diarrhea had slid down both legs and was beginning to pool in my sandals. Mortified, I ran from the store with a trail of watery shit snaking behind me, all the way to my car.