It was a cold, dry January day when I walked down the two flights of stairs to the basement to put a load of laundry in, a trek that was beginning to take its toll. I heard rushing water first, and then looked down to see that the basement was flooded with a good six-inches of brown water. I yelled for my husband, Mike, to come. He pulled on boots and waded in to discover fountains of murky water shooting out of the drain in the basement shower and toilet.

Outside, we quickly noticed that there were municipal trucks and a work crew stationed at the top of the hill where our dead-end residential street intersected with a larger road. We were told the sewer main was clogged. Mike went door-to-door to see if any of our neighbors’ houses were flooding, but ours was the only house on the street with a bathroom in the basement. As our luck would have it, the sewer-water had to go somewhere, and our basement was where it found release.

The street filled up with gawking neighbors. One of them pulled off the manhole cover in front of his house and the sewer-water stopped shooting into our basement and instead, pooled out of the manhole and began snaking down the street toward the river. The town workers had a conniption, and the guy in charge angrily slung the manhole cover back in place. If the sewer-water got into the river, it would contaminate everything. Even though they’d witnessed that it wasn’t us who’d pulled the manhole cover off, the clearly appalled neighbors peered at us like CSI needed to be called in. Every one of them retreated into their home, and we helplessly watched as the sludge rose to a foot in our basement before the workers unclogged the main.

The town sent a clean-up crew who sucked all the water and sludge out and then covered the basement floor and walls with a chemical. My skin incessantly felt like there was something crawling on it and my sleep became restless. I dreamed of spiders laying eggs under my skin and parasites hatching in my gut. So, I begged the town to send the clean-up crew two more times. 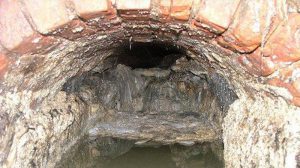 We learned that the culprits of the clog were the owners of the Chinese food restaurant up the street who had been pouring grease down the drain. It appeared the health department had missed years of inspections. The town was liable for everything that was damaged in the basement, but they wouldn’t release the check unless we signed a document declaring that we wouldn’t sue them in the future. We debated for weeks over whether we should sign that document but couldn’t come up with a concrete reason not to. So, we signed it.